Each month, we feature a professor from the Faculty who supports and contributes to feminist legal thought. 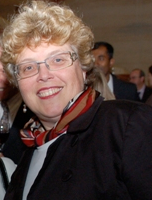 BS: Tell us where you started – what was your path to law?

RCW: I started out having no real interest in, or awareness of the law; my undergraduate and graduate degrees were in music. After finishing my masters, I realized I wanted something a little bit more practical and decided to go to law school. The fact that I had a music degree wasn’t a barrier for law school. My husband was applying to medical school at Western University so I applied to law school there and that was where we both went. I started law school in 1981 … the Charter had not yet been enacted. It was a fine school, I enjoyed my legal education. The one thing that changed my education was the fact that I was in a committed relationship when I started law school, and I had a baby early in second year. Having a baby made me organize my life differently.

BS: I can imagine. What was your very first job?

RCW: My very first job? I worked at a florist while I was in high school – this is actually an example of nepotism as my mother worked as a florist and she got me the job. I basically answered the phone, and wrapped flowers, and swept the floor – nothing terribly creative. I have a lifelong aversion to Valentine’s Day, Mother’s Day and poinsettias at Christmas. When you work at a florist, Valentine’s Day is the worst day of the year *laughs*.

My first law school job was as a research assistant – I worked with a torts professor whose name is probably still on your Torts textbook – Bob Solomon. I also worked for a professor who was doing work on access to justice issues. Another summer I worked for the Law Reform Commission doing research on police powers – search and seizure and things of that sort. I can’t remember the order of those – maybe you can put down that I am very forgetful.

BS: Did you have any particular interest in Torts law then?

RCW: I didn’t have a passion for any one particular subject in law school. When my daughter was born I really just chose classes based on what would fit in a 9-5 schedule. The range of choices when I was in school was much different than it is now, much more classical, much more blackletter. There was a more formalistic and traditional view of what it meant to be a lawyer.

BS: Yes – thinking of the thematic options we have now, a lot of them wouldn’t have been an issue when you were in school, like cyberfeminism for example.

BS: I can imagine. You obviously have an interest in the academic side of law now – when did that develop?

RCW: I think like a lot of new law students I didn’t really know what lawyers did. There were no lawyers in my family. My father was a university professor so I had a model of a university professor growing up. Whilst I was in law school, the most transformative event was having a child. There was nothing in the law school environment that made me think that I wanted to go into practice – but I wasn’t close minded about it. The fact that I did well and ended up clerking at the Supreme Court was probably the thing that made me realize I wasn’t cut out for litigation. I am an ivory tower academic *laughs*. I did go to interviews at law firms – we were recruited pretty heavily as clerks – but they couldn’t slot me into their structure because I said I want to work part time and I want to do research. But that’s not what happens in law firms, you have to work 60 hours a week and you can’t just do research.

BS: I can only imagine what barriers you must have faced being both a female and a mother in a job like that.

BS: What was the ratio of males to females serving as Supreme Court law clerks at that time?

RCW: By the time I was in law school the class was about one third women. And the clerks were at least one third women as well. Since most judges hired for two positions, it was typically one man and one woman per judge. I didn’t encounter what I identified as any sexism in the hiring of clerks. I did get asked many times how I was going to handle being a mother and a clerk at the same time. At the time (1985) I didn’t hear that as being a sexist question but now, of course, I would.

BS: Something your husband probably never heard as a doctor.

BS: What are you working on right now that you’re particularly excited about or proud of?

RCW: One thing I’m involved in right now is a recent private member’s bill, which mandates judicial education on sexual assault for lawyers who wish to apply to the bench. I’ve been involved with judicial education for more than 20 years. There have been some fascinating changes in that time, some really interesting ongoing evolution about the relationship between judicial education and judicial independence. There is much more open mindedness to judicial education now than there used to be. After the Robin Camp Inquiry, and in the wake of the Jian Ghomeshi case, a private member (Rona Ambrose) brought forward a bill mandating education on sexual assault for those applying to the bench – a very obvious response to the public concern over both cases. The legislation is now in front of the Senate, and I have been contributing to discussions over what that education should look like. I find the public story around the legislation very interesting because it suggests that politicians are increasingly prepared to think about who judges are, what they do, and how they do it – and are increasingly prepared to politicize it. I am not sure that is always a good thing. Sometimes it leads to something reactive like this bill, which I think is primarily politically motivated and unlikely to change very much. I think Ms. Ambrose is likely well intentioned, but she is a member of the former government, which took a very regressive approach to judicial appointment. They failed to appoint racialized people or women to the bench in sufficient (or any) number, and now she is pushing a bill, which takes aim at the behaviour of judges, many of whom that government was responsible for appointing. I am writing and thinking about all of this, and at the same time I’m participating in pieces of its possible implementation. One of the benefits of being involved in law for this long is that you have a breadth of perspective. Thinking back to what it was like 30 years ago, I can see a significant evolution in thinking. There is no way a bill like this would have been presented 20 years ago when I began working in judicial education.

BS: Sounds like a really interesting take on the education around sexual assault, it’s a very complicated issue. It’s not a black and white problem.

RCW: No, it’s not. And one of the things that working with judges has given me is a nuanced understanding of how difficult the job that judges have to do is. I am not an apologist for judges who do a terrible job – but it is a really hard job. You may not agree with them, but you have to appreciate the challenges, and I think understanding those challenges makes my teaching in law school and for the judiciary much richer. Even if I don’t agree with a judgement, I start from a place of respect for the judge.

BS: And especially in the context of sexual assault where we have a presumption of innocence for the accused, but we also want to believe the victim, which are almost competing interests.

RCW: Yes and judges live in Canadian society, they read the newspapers, they see the reaction to the Ghomeshi trial and they look at what happened to Justice Camp. And I think most judges are appalled by what he said, but I think they also have very complex questions in front of them. So it’s important for us to give them the tools to make decisions on things they may not know that much about, and also help judges to identify what they may not know, and how significant their lack of knowledge may be to the fairness of a trial. Judges are traditionally the removed, dispassionate observer of the two lawyers duking it out. When judges intervene they tend to worry about the impact their intervention may have on the requirement that they be impartial.

BS: On a less scandalous note, what is the best thing about being a professor at uOttawa?

RCW: The best and most exciting thing over the last 20 years has been the influx of young, interesting, super accomplished colleagues. When I get a chance to spend time with them, I’m always blown away with the work that’s being done. It’s nice to be near the end of my career and be a cheerleader for younger colleagues. It’s really a privilege to be spending time with people who are younger than you and who are doing such important work.

BS: What about your free time – I know that you are an opera singer.

RCW: Yes! I am in a small choir of about 20 and we perform regularly at the Arts Centre. We do a whole range of music at a lot of locations – probably about 6-8 concerts per year. So, a lot of my spare time is doing that. I also have a new grandson and I like to read.

BS: Do you have a favourite book at the moment?

RCW: I just read a book called “The Break” by Katherena Vermette, she is a Metis writer from Manitoba. It’s quite an interesting book for a law student to read – it’s about a sexual assault that occurs within an Indigenous community, and the layers of how the family responds and how they interact with the legal system.

BS: I read about your “dreams of a law school classroom in which Mozart, Verdi and Puccini illuminate and enrich the concepts of equality, professionalism and justice” – tell us more about that.

RCW: I guess I was trying to say that there are connections between music and law. I want to create a classroom that is not dry and technical, but is infused with humanity. For me, music is humanity at its most beautiful. There are a lot of examples of art being used to tell a story that law should pay attention to – access to justice and human rights are examples.

BS: One final question – if you had one piece of advice for law students what would it be?

RCW: Keep alive the part of your life that isn’t connected to the law and see what hanging on to that connection and identity has to say about who you are as a lawyer. I think you’re a better lawyer if you’re engaged by something that moves you which is beyond the law. We often send a message that you have to be consumed by the law in order to be a good lawyer and I don’t think that’s true. I think you’re probably a better lawyer if you have a healthy engagement but also the capacity to be detached from it.